Nitrous Oxide which is known as "N2O" [IUPAC nomenclature] had been called as nitrogen oxide, laughing gas, nitrogen protoxid, dinitrogen monoxide and artificial air. It had been noted from the middle of 17th century. It was lasted about one century to isolate and purify Nitrous oxide by Joseph Priestly in 1774. Of course at that time it was used as an amusement, but in year 1800; Sir Humphrey Davy presented its benefits for pain reduction in surgical procedures in the 580 pages book. Then in 1844 Horace wells found out its analgesia in dentistry but unfortunately could not prove it for others and after passing 20 years Gardner Quincy Colton could reduce the risk and rate of mortality from N2O by adding Oxygen to it and presented a report of 25000 case of successful usage.
At the end of 19th century, this gas was used for labor, but in the first of 20th century its usage increased due to progress of anesthesia equipment. Regardless of pain control, it is used as a fix drug in anesthesia and found a special condition that is also used in the advanced digital anesthesia machines nowadays. 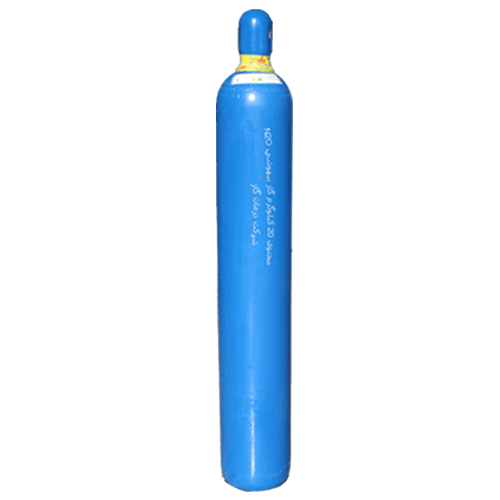 Nitrous Oxide is a colorless, odorless, tasteless gas. Although it is nonflammable, it supports combustion. It's molecular weight is 44 and it 1.5 times heaver than air, while its constitution is 0.5 ppm in the earth's atmosphere.
The Nitrous Oxide molecule is linear N=N=O and commercially manufactured by heating ammonium nitrate to the temperature of 270 oC. Of course some of waste gases such as CO, CO2, NO2, and NO can be produced that in sensitive and subtle procedures they will be omitted and fill in special blue color cylinders. It is liquid in room temperature (21oC) with pressure of 745 PSIG or 50 atmospheres in the cylinder due to its critical temperature and this pressure maintain until liquid is present. Its melting and boiling point are -90.81oC and -88.46oC respectively.

N2O is one of the weakest anesthetic gas which its "MAC" in 1 atmosphere pressure "sea level" is equal to 104% thus cannot be a complete anesthetic gas, eventhough administered with the highest permitted dosage (70%) and should be used with other anesthetic gas such as (Halothan, Isofluran, sevofluran,….) or IV anesthetic drugs (propofol, ketamine, etomidate,….). Of course this low potency has been compensated with the high speed onset of effect due to low blood solubility and its partial pressure increase rapidly in the blood and the brain which usually its effects appears within 30 seconds and vanished in 2-3 minutes.
Its analgesic mechanism has been more cleared up to now and its effects has been confirmed via increase level of endogenous endorphins in supraspinal level and antagonism of NMDA receptor at spinal level. Its analgesic effects start from 20 to 30% and increase to anesthesia with the concentration of 70% as well as keeping the patient conscious, but due to apathy and amnesia in this concentration (50%) the patients satisfy from this method of pain control.

By use of N2O tidal volume decreases, the respiratory rate increases as well as its minute volume and finally the amount of PaCO2 will be kept normal. On the other hand the response of respiratory center to carbon dioxide and hypoxia will be decreased. One of the complications of N2O usage will be a diffusion hypoxia, because of fast diffusion of it, this gas will go to lungs via blood in recovery of anesthesia so makes low CO2 concentration in alveoli and decreases respiratory center stimulation as well as lowers oxygen in alveoli and causes alveolar hypoxia, finally leads to decrease of blood oxygen saturation. So, it is recommended to prescribe an extra O2 in 5 to10 minutes of recovery as the first step after anesthesia recovery room.

although Its effects are the same as CO2 and suppress myocardium directly, because of its sympathetic stimulation myocardial depression is not considerable, except in congestive heart failure and coronary heart disease. N2O also increases the pulmonary hypertension which is more considerable in the patients with COPD and cause disorder in oxygenation because of increasing shunt.

N2O can reduce messages of nerves that come from thalamus nuclei and decreases pain stimulation by it also can cause vascular dilatation in brain and while it has the least effects on brain metabolism, ICP will increase that could be confronted by alveolar hyperventilation. Thus it is recommended to avoid N2O usage in patients with high ICP such as brain tumors before cranium has been opened.

N2O can increase the activity of skeletal muscles but has no effect on muscle relaxant drugs. It also has no direct effect on kidney function, renal glomerular filtration, renal clearance and urine concentrating ability. In liver there is no metabolism of it and just can affect the intestinal bacteria's reduction and creating free radicals causing lipids peroxide. Also N2O can inactive vitamin B12 and inhibit metyonine synthetase so cause megaloblastic anemia, this problem could be present in long exposure (more than 24 hours) or repeated exposure in one week while in surgical patients especially in ill patients, pregnancy and in wound healing disorder or serve infection, it is not recommended to use it as an anesthetic.
N2O can cause abortion in persons working in operation room or dentist swifts without any proper air-condition and scavenging. On the other hand, by considering all safety rules and security with keeping its concentration below 25 ppm there will be no complication. Although there is a proposal of germ cells changing in men by N2O but is not approved with any clinical signs of it.

It can be passed via placenta and get the fetus but umbilical blood concentration is less than mother's blood and will increase in 5 to10 minutes, so after this can suppress the fetus. Of course the mutagenic and tratogenic effects for N2O have not been proved. N2O has been used as an analgesic in labor pain for more than 100 years and its special specification as fast onset and offset beside of easily application cause its usage to be maintained.

It is presented in 4 groups:
1- Increasing the closed air space in the body like pneumothorax that, for example increase its size twice or three times within 20 minutes by 70% N2O usage.
2- Increasing nausea and vomiting after anesthesia especially after ear, eye, throat and laparoscopy operations.
3- Inactivating of vitamin B12 and arise hematological (megaloblastic anima) and neurological complications.
4- Causing diffusion hypoxia in the first step of anesthesia recovery and decreasing arterial oxygen saturation.

To days; like the first period of this gas presentation, it is seen that funny used of it may be more present and can cause complications like blood disorder and neurological as well as psycho mental addiction. So, it is strongly recommended to use under doctor prescription.